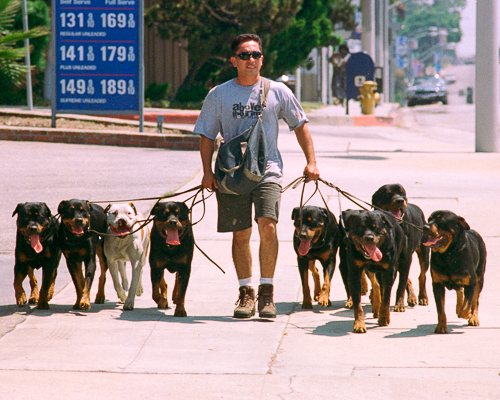 Dog days of summer. I captured this image of the young man walking the dogs in late August during the late 1990s. I was looking for a photo for a feature that had to do with the heat in late August, which is called “the dog days of summer”. As I was driving down a street in LA, I saw the young man walking all of the dogs and I knew I had my shot. I drove past him to get in front, jumped out of my truck, and took several shots of him with the dogs. When he got closer to me, I asked him his name and he was reluctant to give it to me. I told him it was okay I was a news photographer, and his image would make a great photo for the paper.

All he said was to reference his name as Cesar. The LA Times ran the photo on the front page of its local section, and I received several phone calls from his friends. Because of the photo, a few months later the LA times did a feature story on the young man, and he became famous. Several years later an NBC news program wanted to use the photo and contacted me. When they inquired about the photo, the name sounded familiar, but I did not recognize it. The producer on the other end said the young man in the picture was Cesar Millan, The Dog Whisperer. Side note…when their feature ran on the news program, I found out why the young man did not want to give his name that day. It was shortly after he had come to America illegally and started working. Yes, at the time I captured the photo of Cesar Millan, he was an illegal immigrant!

WELCOME TO MY BLOG